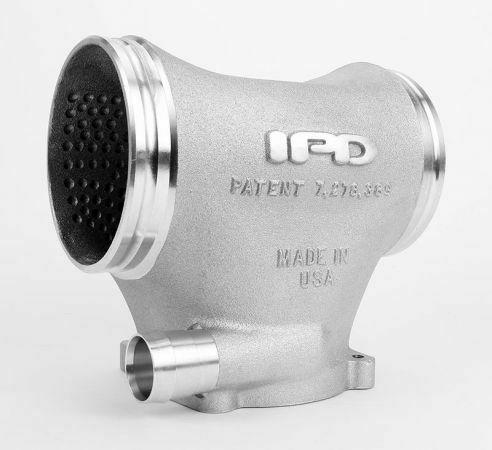 The 997 marked Porsche's return to the round headlights and curvaceous fenders reminiscent of the 993 and earlier era Carreras. Although the 997's picturesque styling is another milestone in Porsche design history there is still room for improvement in the engine performance department.

Porsche has been controlling engine output by restricting the inlet track for decades. This has been successfully accomplished by utilizing smaller throttle bodies. This simple power control solution has been a very effective way of preventing lower level models from out performing certain flagship models, especially models with prolific racing pedigree. Although the factory engine packages are fantastic performance machines, they are engineered and developed to achieve specific performance numbers that satisfy a target demographic and compete with rival brands. Unfortunately driving enthusiasts who seek an elevated Porsche driving experience require performance levels well outside the target market.

All of the IPD Plenums deliver substantial power and torque gains, but when combined with larger throttle bodies they perform even better. All of the IPD "Competition" Plenums utilize the next largest size throttle body offered by Porsche. In this case, the Competition Carrera upgrades the factory OE 74mm throttle body with Porsche's 82mm 997 GT3 throttle body. All of our Competition Plenums are designed to perform with cars equipped with high performance exhaust systems. The more extensive the exhaust system (headers, kats and mufflers) the better. Optimizing air intake and exhaust together creates a balanced performance package that allows the engine to inhale and exhale more air thus creating more power and torque.

IPD has pioneered another new Plenum design with the Competition Carrera Plenum. Laminar flows and volumetric efficiencies have been further enhanced with our unique and innovative internal merge collector area. This completely new approach has yielded not only great performance gains but more linear power delivery and improved throttle response as well. Gains vary depending on pre-existing mods and quality of after-market exhaust installed. As we all "should" know, horsepower and torque become harder to find and typically more expensive as we climb the proverbial performance ladder. That being said, performance components yield different power gains depending on the order they were installed. IPD tests and evaluates all products on bone stock cars, this establishes a level playing field and a better "apples to apples" comparison. The Competition Carrera Plenum however is designed to work with applications that are already moderately to heavily modified. Power gains will vary with each Carrera, but the bottom line is, there will be noticeable and impressive gains that are sure to make any Porsche Carrera driving enthusiast smile.

Power improvements will be fully realized once the factory ECU/DME makes all the necessary "adaptation" requirements. This process can be expedited with a series of "hard pulls" or spirited full throttle acceleration runs through the gears. Of course this should only be performed on a closed course circuit.

Superior and more efficient design over the factory intake.

Produce substantial gains for both turbo and NA applications.

Do not require an ECU flash and will not cause a CEL.